A Peek into the Shark’s Belly 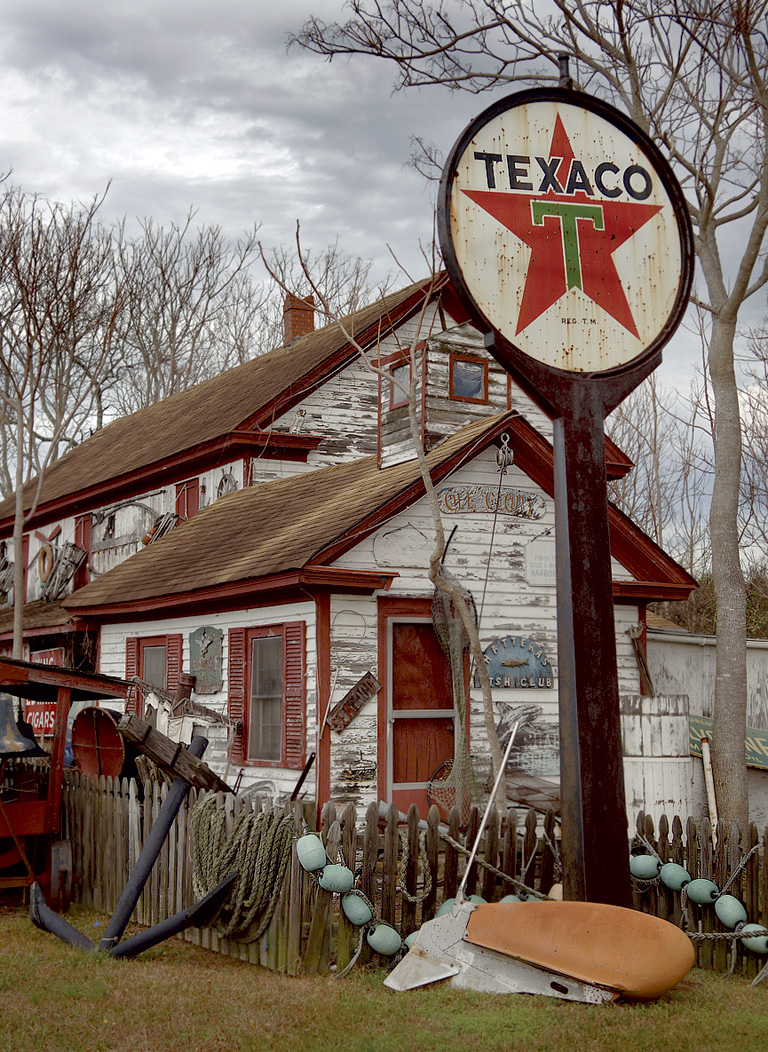 The Shark Shanty in its heyday. Photo courtesy of John Kline, Desert Photo Restoration. Use of photo by permission only.

I’m not sure if it was the double decker bus, the giant Texaco sign or the overgrown enchanted forest-like entrance, but I’ve always been drawn to the building on the side of Highway 158 in Currituck. Probably the most famous, or infamous building in Powell’s Point, the Shark Shoal Shanty looks like a magical farmhouse plucked right from an episode of American Pickers and incongruent with all of the flashy signs advertising oceanfront rooms and salt water taffy. Yet, since around 1900, the 3-story farmhouse has sat quietly and watched this small rural area in North Carolina grow into one of the most popular tourist destinations in the country.

With only two true roadways in and out, there’s about a 50/50 shot that you have seen the Shanty on your way to and from the beach. Very few people have ever been inside its doors though. I was never fortunate enough to be one of them—or was I?

Like many of my friends, I get so busy being involved with life—planning, paying, shopping, building, driving, cleaning, going, that I miss the many small opportunities that life presents us. I missed the opportunity to stop at a building that has sat there for over 100 years and that I’ve driven by at least as many times, because I was always too busy to pause, stop and pull the car over to peek inside.

There is no doubt that I would have loved it inside the Shanty. A gigantic house full of old stuff that is for sale? Items with a history all their own? Pictures, trophies and glass bottles that tell a story from long ago?  Yes, I think I could have found my place at the Shark Shoal Shanty.

From past reports, it seems the owner, Don Austin, was a bit of a pack rat who ran the store simply so he could buy more things and then turn them over. Although later accounts say he was reluctant to part with items because it meant he could not showcase them to the next few “customers” who came into the store.  Whether storefront or museum, the Shark Shoal Shanty closed its doors approximately a year ago with the death of Mr. Austin and the contents of the building were liquidated through the several auctions it took to clear out the years of collectables.

It is with more regret that I was never able to attend one of these auctions. I went so far to contact the auctioneer to find out the details, but alas, was always to “busy” to be able to make the short drive across the bridge to attend.

However, one summer day as I was driving to Virginia, the auction tables were set up outside after what I presumed to be the final auction. In this moment, I stopped, turned the car around and pulled into the yard. After peeking in the cobwebbed covered windows in hopes to catch a peek of the interior, I wandered over to the rickety wooden tables.

The rain the night before had dampened some of the items, which again I presumed to be the leftovers, this discards, the rejects. There was an old 8×10 black and white photograph of three women in a marching band with poofy hats, short skirts and holding batons. An old bowling trophy from the 1960s that I am sure was the source of pride for some dapper fellow who displayed it on his mantle. Photographs, old letters, and other ephemera littered the tables and melted slowly into the rain. These were the secrets, the memories, and the legacies that the Shark Shoal Shanty preserved for so many years.

Returning home, I pulled out an old worn shoebox of my own and removed a handful of black and white photographs. My grandmother with her first car. My dad catching a large bass at the lake. My own grandfather beaming with pride with his bowling trophy. Photos that I had not looked at for years—my own legacy—that I was simply too busy to pause and reminiscence upon.

Although I didn’t get the opportunity to peek inside the belly, the Shark Shoal Shanty helped turn my good intentions, one days and should haves into a brief pause in my life to reflect on my own treasures.

I’m sure Mr. Austin would have approved of that—for I’m not ready to part with my photographs either. There are still people I’ve yet to meet that I’ll need to show them to.