A Look at the Beloved Pioneer Theater in Manteo 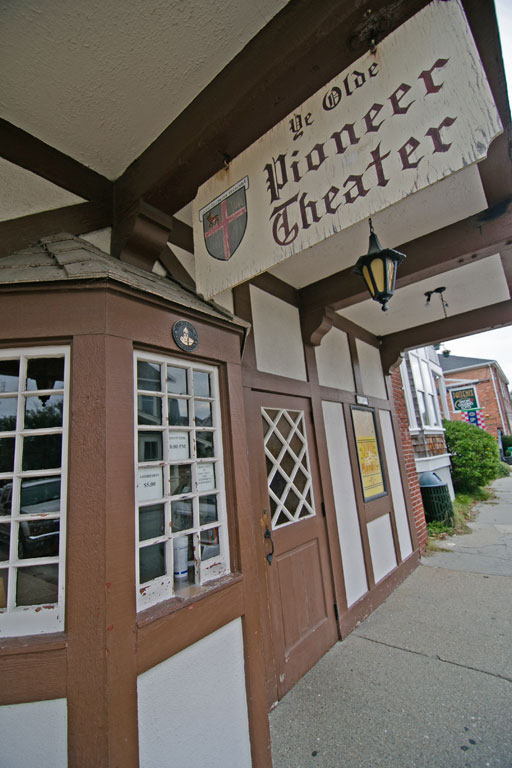 Historic Pioneer Theatre from the street.

It’s the popcorn. The aroma is the first thing that hits you when you approach the ticket office. Okay, maybe it’s the second thing you notice after the unique Tudor exterior so reminiscent of historical Manteo. The lobby door opens and that fresh popcorn smell hits you like a warm blanket on a chilly night. Then you see the smiling woman behind the paned glass. “Two, please,” my intended utters as our taste buds go on high alert.

“That’ll be $10.” Say, what? Ten bucks for two tickets to a first run movie at 8pm on a Saturday night? That’s incredible! He hands over a twenty and starts to walk away, but she taps on the glass to remind him that he has change coming. Old habits die hard.

“Is Mr. Creef in?” I inquire as she hands over the ticket stubs.

“Mr. Creef passed away in July,” she utters apologetically. “But Buddy is right there,” she indicates with a wave of her head. I knew the beloved genius H.A. Creef had passed, but I extended the courtesy to his son, Buddy, the equally beloved inheritor of this revered institution.

“Thanks for coming,” says the tall, smiling man in OBX appropriate attire—a t-shirt, shorts and flops in November. He claims the flops are an upgrade. I like him already.

“What IS that smell?” inquires my date. “It’s the popcorn!” say Buddy and I in unison. “Best you’ve ever had, GUARANTEED—or your money back,” asserts Buddy. Based on the enticing aroma, one would have a hard time doubting his claim. It’s a “secret family recipe”, according to the concession dude.

We enter the small lobby, and Buddy follows, encouraging the line at the concession stand to tighten up so we can get a few more folks in. The intoxicating smell is enhanced by the ever-present sound of the popcorn bursting and the sight of the cascading waterfall of white deliciousness tumbling out of the popper. Popcorn is $1.50 and the accompanying soda and candy is also $1.50. My steely resolve to avoid the concession stand has evaporated. My friend, Jason, an eight year employee of the Pioneer, is manning the concessions, and I know we’ll get stellar service as well as a timely entrance to the theater, despite Buddy’s assertions that he’s “almost ready.” Locals chat around us… parents with their kids, teens in groups, Saturday date night folks and the established couples like us on their weekly sweetheart nights out. It’s the typical mixed crowd for a movie at the Pioneer.

It’s a beloved institution, and that’s for certain. With Buddy Creef at the helm, it’s the oldest family run theater in the country—having opened in 1918. The above scene has been repeated for generations of movie nights on the Outer Banks. Outer Bankers LOVE this theater. It’s home to us. It represents a nostalgia and sense of family that can’t be replicated elsewhere. Stolen kisses, school trips, friendly gatherings, local teen scene, public humiliation, tradition and so much more are all housed in the worn but beloved aisles of this theater.

“My grandfather went to every new movie every week until his death,” recalls one. 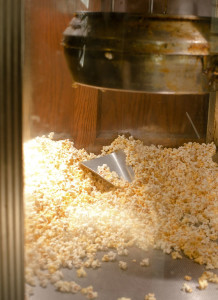 It’s the popcorn. Popped fresh for every show.

“Awwww, I got my first kiss there,” remembers another.

“I own three seats from the original theater,” brags a local.

“I can’t imagine this place without it,” says my thirty-something niece who visited the theater during class field trips during her middle school years.

It’s that amazing popcorn. That smell brings you back to the nostalgia of forgotten but treasured times when life was simpler and Buddy’s dad, H.A. Creef called you to the front of the theater when your cell phone went off in the lobby. He was revered and honored for maintaining “entertainment” in the town of Manteo for decades. He always said that it wasn’t a movie theater, but an old timey movie house where you can enjoy quality family entertainment. You can’t get popcorn like that anywhere else, and you can’t get an experience to rival that of attending a movie at the Pioneer Theater.