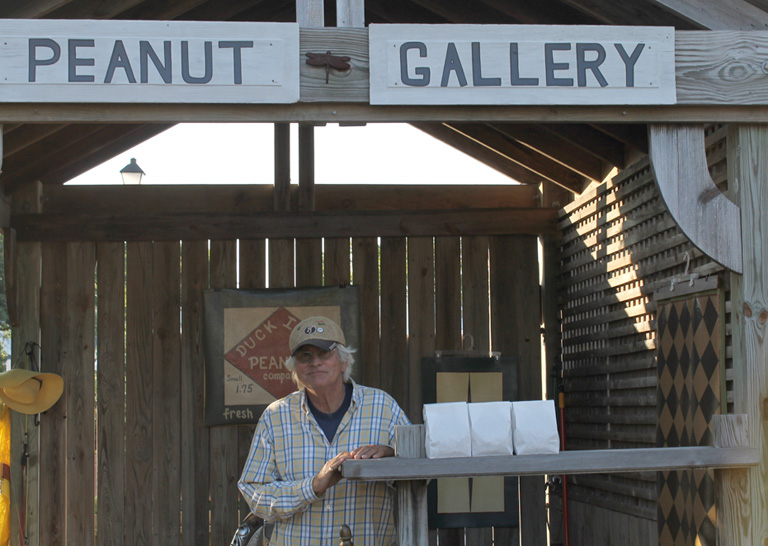 Sometimes life is a just plain nutty for the owners of the Duck Island Peanut Company in downtown Manteo. On the corner, just before the turn for Roanoke Island Festival Park, Bill Heim and his wife Chris are roasting and selling from 10-6 or later if there’s people or the weather’s agreeable.

The aroma rising from the 1930‘s stove wafts around, drawing the crowds like the sign atop the humble little shack—The Peanut Gallery, as they affectionately call it.

The Hiems get their raw peanuts from Sandyland Peaunts in Harrellsville N.C. “I roast the batches starting first thing in the morning and get the peanuts good n’ hot and it’s like it’s deep-fryin’ in its own oil. It’s called dry roasting,” Bill says.

“They’re a Virginia hybrid peanut. It’s classified as Jumbo. It’s the biggest one,” he explains.

“My wife, Chris, puts the Gallery in Peanut Gallery,” Bill says,  proudly pointing out her bygone era art, skillfully painted on sailcloth with local landmarks and beautiful snap-shots of every day island life. The technique dates back to the early 1800’s when old material from sails were painted to keep out the drafts between floorboards. “This was the prototype that became oilcloth and with mechanized times, linoleum.”

Mrs. Heim crafts her floor-rug sized creations in her home studio located between Wanchese and Oregon Inlet. “We live off the grid,” declares Bill. “With a windmill and small generator.” Their present home, the old Duck Island Hunt Club, was built in 1937 and housed the elite socialites of the day. Mr. Hiem laughs, “Now it’s home to us and our four dogs.”

Hailing from Pennsylvania, the pair operated a tavern and began roasting nuts for wholesale. “I was selling a ton a week and between that and my other business it became too much.” Now living where they once vacationed, Heim happily states, “We chose Manteo for our business because it reminded me of where I grew up.”

The pace of life in Manteo seems to agree with Bill, and with his boyish grin, he loves a humorous or insightful story. “That to me means as much, if not more, than the money.”

“Did I tell ya the one about the parrots over there?” beams Bill. He had heard the theme to “The Andy Griffith Show” After the first two weeks he commented to the lady in the house next door “No, it’s not the TV, It’s the parrots, they’ve been singin’ it for nearly 35 years.” On the heels of a soft chuckle and a heart felt sigh Bill shifts forward to stop the rocker “They have really made us feel welcome here.”