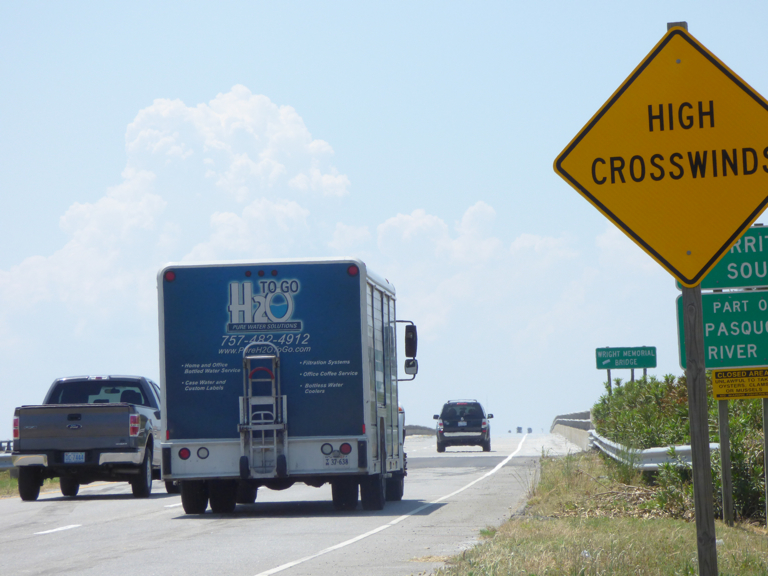 Westbound traffic is once again using the outbound span of the Wright Memorial Bridge.

Scheduled for a May 15 reopening, the westbound span of the Wright Memorial Bridge opened for traffic a day early.

However, only 2/3 or the span has been resurfaced, and according to Jennifer Garifo, Communications officer for NCDOT, the remaining work–including repaving the western third of the bridge and finishing work on the expansion joints will be completed after the summer season. Construction is scheduled for mid September to mid May.

Driving the bridge, the first 2/3 of the road is smooth–performing as advertised. However, the final third of the bridge is clearly unfinished. The roadbed goes from a milled concrete surface to the original concrete, with the up and down motion as the car crosses expansion joints characteristic of the original road.

The contractor’s plans called for the entire project to be competed by May 15, but an exceptionally harsh winter delayed construction and prevented finishing repaving the surface. Although the road is drivable, the temporary roadbed now in use seems at odds with NCDOT assurances in a Winter North Beach Sun article on the work that was being done.

At that time, NCDOT officials were confident there would be a completed resurfacing of the bridge, even if other parts of the project were not finished. Specifically, state officials felt work on the expansion joints could be finished after the resurfacing was done.

The new schedule matches the original timeframe NCDOT projected. “We felt like it was going to take two years,” John Abel, Bridge Construction Supervisor for NCDOT North Carolina District 1 said when interviewed for the Winter article. “They (the contractor) felt like they could do it in one season if the weather cooperates.”