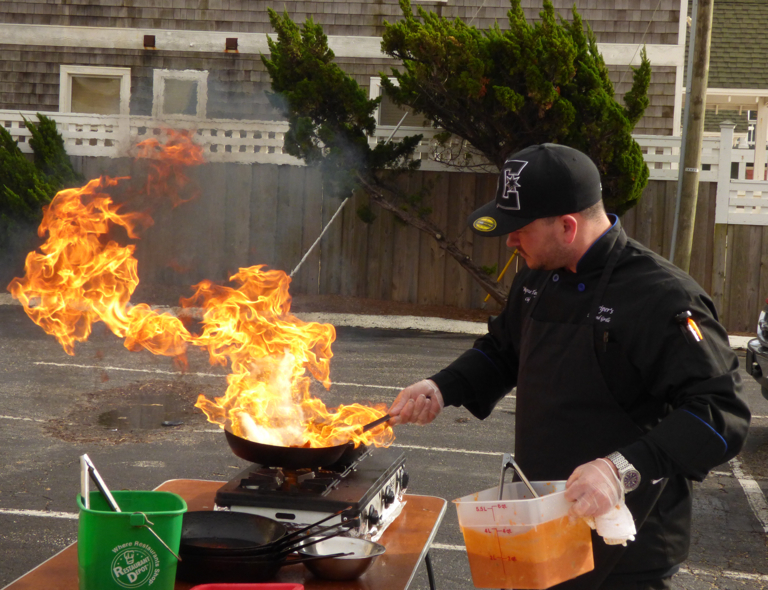 With the first ever Fish Taco Cook-off at the Sea Ranch Resort scheduled for Saturday followed by the 5th Annual Shrimp Cook-off on Sunday at Ocean Boulevard, the weekend was shaping up to be two terrific days of seafood tasting.

That, of course was before Mother Nature changed everyone’s plans with a powerful but fast moving storm Saturday into Sunday. The Fish Taco Cook-off, which was an outdoor event, was moved to Sunday, at first noon to three, then looking at the weather, the starting time changed to 1:00 p.m.

An indoor event the, the Shrimp Cook-off with eight chefs participating, was packed. It’s a fundraiser for Outer Banks Center for Dolphin Research, and just looking at how many people showed up, it seems the research center received a substantial financial boost. 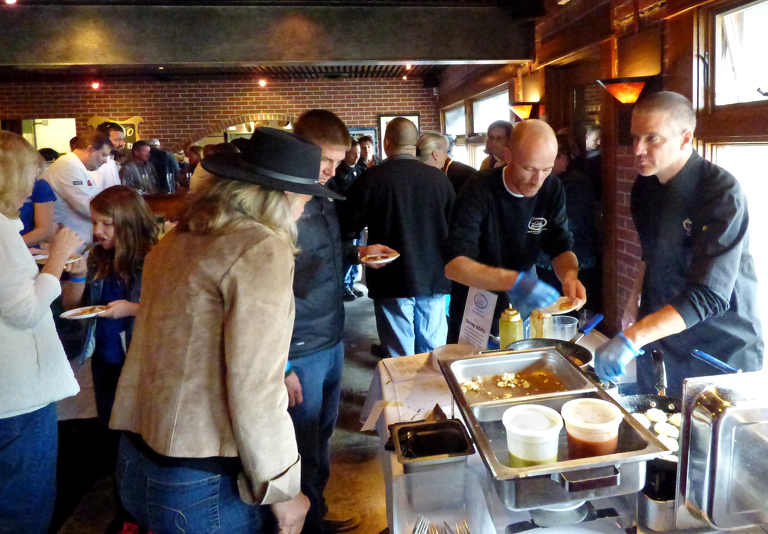 Here are the participating restaurants this year: Ocean Boulevard, Pok’s Art, Black Pelican, Cafe Lachine, Metropolis, Coastal Provisions, and the Saltbox Cafe. The list of restaurants is offered as a way to explain why there was no clear favorite.

Chef Renee from Black Pelican was serving this wonderful sort of Asian influenced shrimp; then there as the perfect blending of flavors and texture from Chef Pok. Chef Randolph Sprinkle from the Saltbox Cafe created a marvelous barbecue shrimp . . . and we haven’t even mentioned the tapas style creation from Metropolis.

It’s probably easier to focus on what a great time it was and just seeing so many friends and neighbors was a reminder of what a great sense of community the Outer Banks has.

That sentiment was echoed by Donny King, owner of Ocean Boulevard. “I just gets so excited by this every year,” he said.

Sometimes the best laid plans hit unanticipated glitches and that was certainly the case with the First Annual Fish Taco Cook-off. Held in conjunction with Outer Banks Restaurant Week, everything seemed in place. Fourteen first line chefs were signed up, music from Tim Ross and Brad Privott was on tap and the parking lot of the Sea Ranch had been used for other Cook-off events and things went off without a hitch. 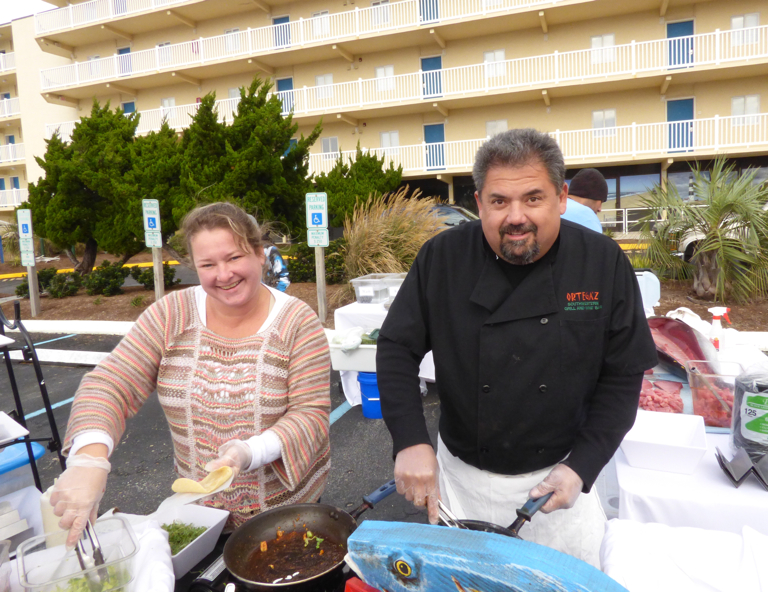 Chefs Lisa and Marcello Ortega of Ortega’z with fresh tuna behind them.

The weather definitely threw a curve or maybe a monkey wrench into the plans. Originally scheduled for Saturday, concerns about a forecast that called for rising winds and rain showers that afternoon, forced organizers to move the event to Sunday.

They finally got things going at 1:00 o’clock Sunday afternoon, and yes it was a bit chilly out there, especially when the sun ducked behind the clouds—which seemed like almost always.

But, the weather notwithstanding, the tacos were amazing, the event a lot of fun and here’s a vote to have a Second Annual Fish Taco Cook-off next year.

In the same vein as the Shrimp Cook-off, there has to be some hesitation about picking a best of. The judge’s and People’s Choice winner in this one was the same—the incredibly fresh tuna taco from Ortega’z in Maneo. How fresh? Every portion Chef Marcelo prepared was cut from a just landed yellow fin tuna behind the cook stove.

It was a memorable combination of texture, flavor and freshness—deserving of the first place award. Not that there was anything wrong with anything else that was sampled.

A wonderful day. Fulfilling in community spirit, and certainly filling physically as well.