A Commercial Fisherman Speaks Out

By Dewey Hemilright, An Edtiorial as told to Kip Tabb – 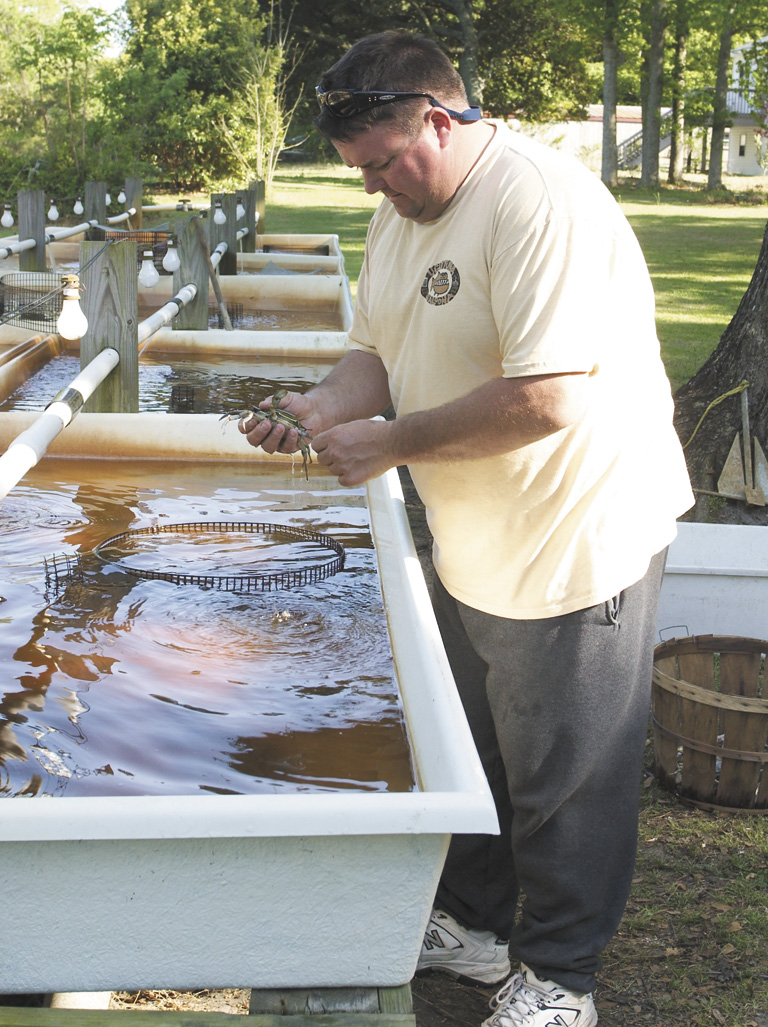 Dewey Hemilright at his crab shedder.

I am a commercial fisherman and I love what I do. There is so much that I like about it— no two days are the same; the different things you see out there; knowing that you’re providing fresh seafood to people who don’t have access to a charter boat or own their own boat.

I have lived on the Outer Banks my entire life, and I have been a fisherman since I first started working. Over the years, I have come to understand that what I do is vitally important to our small communities. We’re here year round and my economic impact on this community does matter: for me to catch one species of fish there are probably 30 people who benefit.

It is important, I believe, to state clearly that I, and every commercial fisherman I know, are in favor of developing sustainable management practices to ensure adequate seafood stocks.

I have become increasingly concerned, though, about the direction the policies the National Marine Fisheries are leading our commercial fisheries. It is my belief that policies being put into place are not sustainable for our small communities and that the ultimate outcome will be privatizing our oceans for the benefit of large corporations.

Increasingly NMF is creating catch/share programs. In a catch/share program the government allocates a portion (share) of the quota for a particular species (catch) of fish to members of a fishing fleet. The theory behind this system is that it creates a longer and more sustainable harvest because I can fish for that species any time during the year, provided I do not exceed my share.

There are a lot of problems with this system. I am not in favor of catch/share under any circumstances, but no matter what, the science must be complete before it can be implemented. Consistently, however, catch/share programs are imposed before studies of fish stocks are completed.

The result is a concentration of shares controlled by relatively few fishermen. Today in New England, largely because of catch/share, 55 boats control 61% of the catch.

There are other very significant problems as well with NMF management.

The level of bureaucracy is so deep that even if you had a dry suit on you would still be soaking wet. We are regulated by NEPA (National Environmental Protection Act), Magnuson-Stevens Act, Marine Mammal Protection Act,  the Regulatory Flexibility Act and there’s three or four I’m sure I’m forgetting.

The result is we are often waiting five to seven years for decisions that are affecting people today.

Here is an example of how slow moving the process is. Because of concerns about catching two species of fish, Warsaw Grouper and Spotted Hind, in a certain area off the  North Carolina coast, that area was closed to all fishing on January 30, 2011.

The South Atlantic Fisheries Management Council (regional governing council for fishermen) reviewed the data and there was near universal agreement that a mistake had been made. In fact, on the same day the closure was ordered, the council agreed the closure was in error and the area had to be reopened. By law a comment period is required and that period closed on January 19. I am writing this in May 2012, and just today, 16 months later, the closure ordered by Regulatory Amendment 11 finally has been removed.

The two species of fish in question are not found in those areas You have a better chance of finding a Coke in Pepsi factory than speckle hind and Warsaw in certain areas of closure.

What is particularly frustrating is they are basing the reopening on information they already had. No new science, no new data—just experienced fishermen saying, “You’re wrong.”

Fishing is not a 9-5 job, and there is a disconnect between the people creating the regulations and the fishermen. The people at the top do not appear to know how the fisheries operate at the bottom, but the fishermen at the bottom are the ones who feel the full force of those decisions.

Dewey Hemilright is a commercial fisherman living in Kitty Hawk. He was recently appointed to the Mid Atlantic Fisheries Management Council by Secretary of Commerce. Gary Locke.