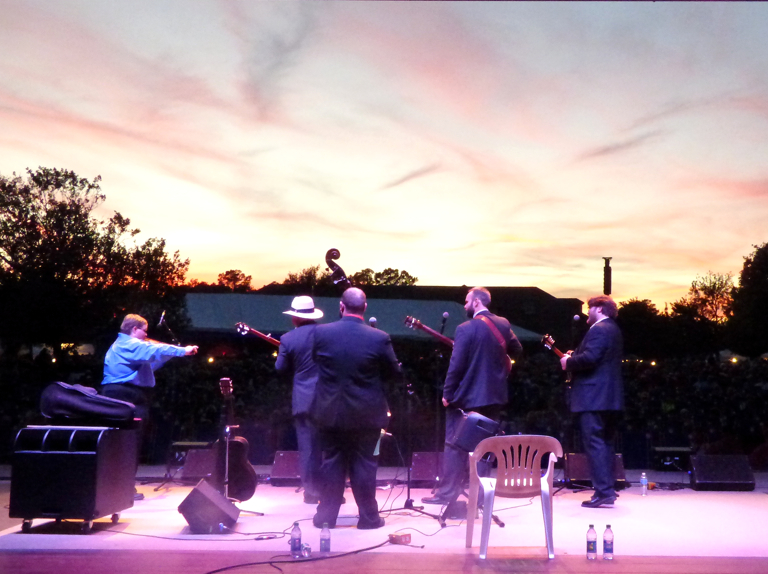 After three years and innumerable performances, the Outer Banks Bluegrass Festival is still fresh and wonderful.

It would be hard to imagine anyone other than Cory Hemilright—the promoter—or Kim Sawyer, the executive director of Roanoke Island Festival Park where the event was held, seeing every act for four day. But what I did see demonstrated a remarkable diversity of music performed by amazingly talented musicians.

It’s difficult, if not impossible, to pick out a favorite.

One group that really stood out, though, was the Steep Canyon Rangers. This is the band that plays with Steve Martin—that “wild and crazy guy” who is also a wild and crazy banjo picker. 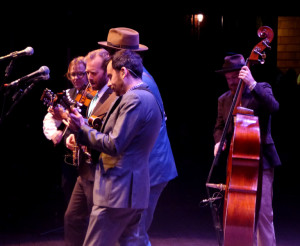 Martin wasn’t able to work the Outer Banks into his schedule, but they didn’t need him to put on a great show.

It was a combination of lots of fun as they danced across the stage playing music and amazing musicianship. Favorite moment in an hour set that left me bowled over: violin/fiddle player Nicky Sanders is clearly classically trained. Even before looking up his bio I knew that was the case because, in the middle of long and complex break he started plucking “Norwegian Woods” by the Beatles and then followed that with classical medley of tunes. All of it played over a very traditional bluegrass rhythm and chord pattern from the rest of the band.

It was everything that the best musicians consistently do. It was different, challenging and marvelous.

The Steep Canyon Rangers were not the only highlight of the event.

Cory Hemilright has managed to corral some of the biggest names in bluegrass for the festival because of the venue—almost every artist remarked upon how much they liked RIFP and the Outer Banks. But what really seemed to move the festival from a “hope this works” dream to a thriving event was Rhonda Vincent’s decision to come to the first annual gathering and coming back every year. 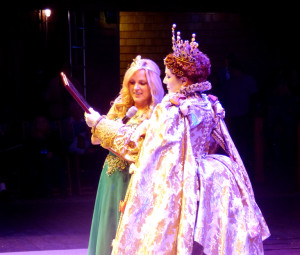 Rhonda Vincent receiving Queen of Bluegrass Island plaque from the Queen of England.

To honor her, Cory asked the Queen of the Lost Colony to crown Ms Vincent “Queen of the Bluegrass Island Festival.” Set up beautifully—she thought she was going to read the winner of a drawing, Vincent was clearly surprised when the Queen joined her on stage.

Later, when she came back with her band the Rage, she showed why she may be the queen of bluegrass. A consummate professional, her band is tight, her vocals excellent, she is a very, very good mandolin player and she relates to the audience as well as anyone who has ever taken the stage.

A particular highlight was the tribute piece to country singer George Hamilton IV who passed away about two weeks ago. A beautiful ballad, the band’s interpretation highlighted the range and tone of Vincent’s voice.

A characteristic of the Outer Banks Bluegrass Festival is the multiple headliners that take the stage. Many of the groups are often the headliners at whatever show they are performing, and to gather this level of talent under one heading is remarkable.

The Steep Canyon Rangers are usually the headliners, but they performed before Rhonda Vincent. The band before them, Blue Highway has been together for more than 20 years and they were outstanding.

But there are headliners, and Rhonda Vincent was the Friday night focus and Saturday night it was Ricky Skaggs and Kentucky Thunder. 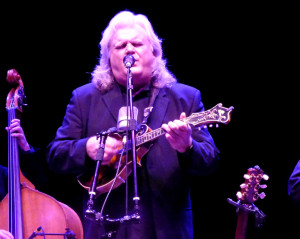 Highlighting a very traditional bluegrass sound, Skaggs and his band took that sound and demonstrated how well it can be played. Skaggs continues to amaze on mandolin—he is crisp, he is clean and he drops each note in exactly where it’s supposed to be. It is a subtle skill in some ways, not necessarily a sudden flurry of sound, but a virtuoso performance nonetheless.

The Festival always includes fireworks, and the Friday night show was spectacular.

In large part because of his efforts with the Outer Banks Bluegrass Festival, Cory Hemilright has been nominated for a Momentum Award from the International Bluegrass Music Association.