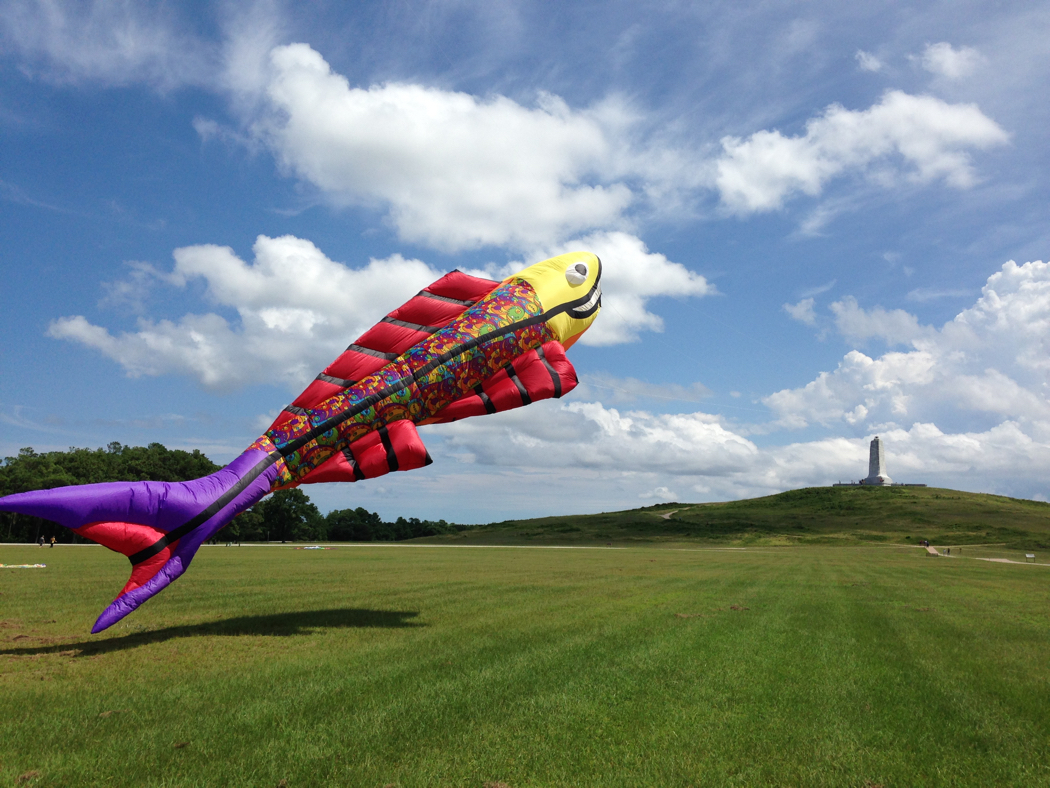 There is something really cool about flying a kite on the same patch of dirt the Wright Brothers first launched their kites.

For 38 years, Kitty Hawk Kites has been bringing the Wright Kite Festival to the Wright Brothers Monument and over that time, thousands of people have had a chance to paint the sky with every form of kite imaginable, to learn how to fly a stunt kite, or even make a kite—an activity every kid seems to be naturally drawn to.

As conditions for kite flying go, the weekend wasn’t so great. Marketing Manager Jeff Schwartzenberg said the crew hung around as long as possible on Saturday, but about 12:30, when the rains came accompanied by flashes of lightening, the feeling was that it was time to pack up and wait for a better time.

Sunday was a beautiful day, although the phrase “light and variable winds” seemed to the order of the day. Nonetheless, there was a lot of kite flying activity. 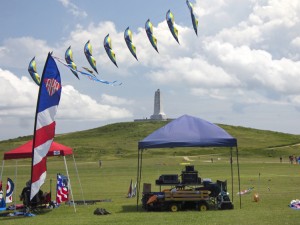 Flyers from as far away as Wisconsin were dancing quad-line kites in the sky in a remarkable display of aerial ballet. The music was mostly jazz with a little bit of funk.

Quad line kites have four attachment points, allowing astonishing maneuvers. Interesting to note that before the term “quad line” was even coined, two brothers from Dayton, Ohio were flying huge box-like kites with a control mechanism remarkably similar in appearance to the modern quad line handle.

Wilbur and Orville’s 1899 kite, with its 6’ wingspan, was the direct ancestor of their 1901 and 1902 gliders that led to the December 17 flight in the Wright Flyer.

History aside, everyone was there to enjoy themselves. 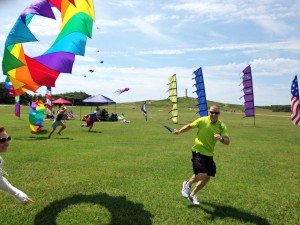 There were parachute races—not really a parachute, more like a drag chute used to slow moving vehicles down. They also slow running children down. Face painting as always, and had kids lined up. And, of course, kite making is invariable popular.

The sled kites Kitty Hawk Kites uses for their kite making are perfect for anyone three years of age and up—easy to make and guaranteed to fly with just a little effort…ie. running.

It was tough getting some of the bigger kites in the air. The morning winds were a little better and the whale and fish were in the sky for a while, but in the afternoon, there just wasn’t enough consistent wind to fly them.

Even if conditions weren’t ideal, it looked as though everyone was having a good time, which ultimately is the point to the festival. And who knows, maybe next year’s 39th Annual Wright Kite Festival will have a little better conditions.