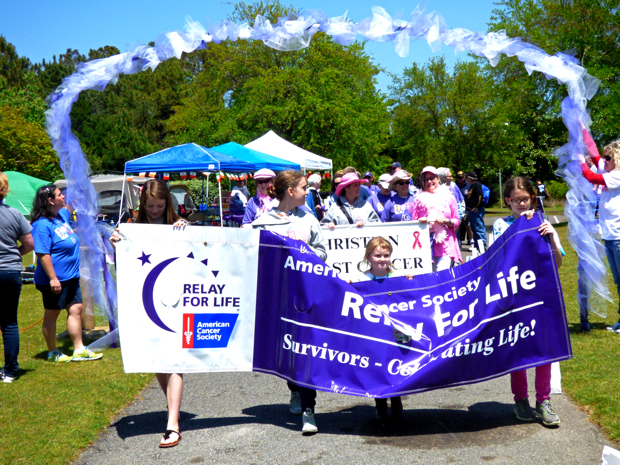 With cancer survivors leading the way, the 2015 Dare County Relay for Life gets underway on Saturday.

The Dare County Relay for Life began in brights sunshine on Saturday and walked through the night ending a little after dawn at 8:00 a.m. on Sunday. With perfect, if cool, weather and a beautiful setting at Roanoke Island Festival Park, Dare County took a $35,000 step toward the goal of the American Cancer Society of ending cancer.

That goal will be achieved in small steps—baby steps perhaps, the first step perhaps most important . . . “creating a world with more birthdays.”

The impact of cancer runs throughout our lives, and in a moving and extraordinary tribute to her sister-in-law, Kathryn Scott stood on the stage and described how the greatest value in life is often how we face our fears.

Scott, a breast cancer survivor herself, told the story of how her sister-in-law when confronted with the diagnosis of an inoperable stage four brain tumor, created something good and positive from the verdict that had been passed on her life.

She described a person who treasured each moment she had, loved her children, husband and family . . . loved life and lived it to the fullest.

“There’s a message in this,” Scott’s sister-in-law told her. “Somebody has a lesson to learn from this.”

“It was something that happened to her, but it did not define her,” Scott said in describing how the last two years of her life was lived.

Relay for Life begins with the cancer survivors taking the first lap. It is a tribute to human spirit and progress that has been made to see so how universal the disease is in this community or any community. There are children, mothers, fathers, the elderly, teenagers . . . it is in so many ways an illustration of the community.

There is a fair-like quality to the day—the First Flight High School Leo Club was there, selling raffle tickets (I’m still waiting for my phone call); Manteo Middle School AVID students were there with their teachers—for $1.00, you could place on a map of the world a pin of places you had been.

Jeanne Brook brought her Outer Banks Doves to the park for a release—this year particularly poignant because Jeanne’s sister Kat Reilly was recently diagnosed with cancer. For years, Kat has been a driving force behind the Dare County Relay for life. Kat is doing very well.

“I have been handing off birds for people to release at Relay for years but I didn’t truly understand the emotional effect it would have on me to release one in honor of my sister who is fighting cancer,” Jeanne wrote on her Facebook page.

That acknowledgment that cancer is truly a part of the life of our community and that the coming together to fight it is the best shield agains a sea of trouble.