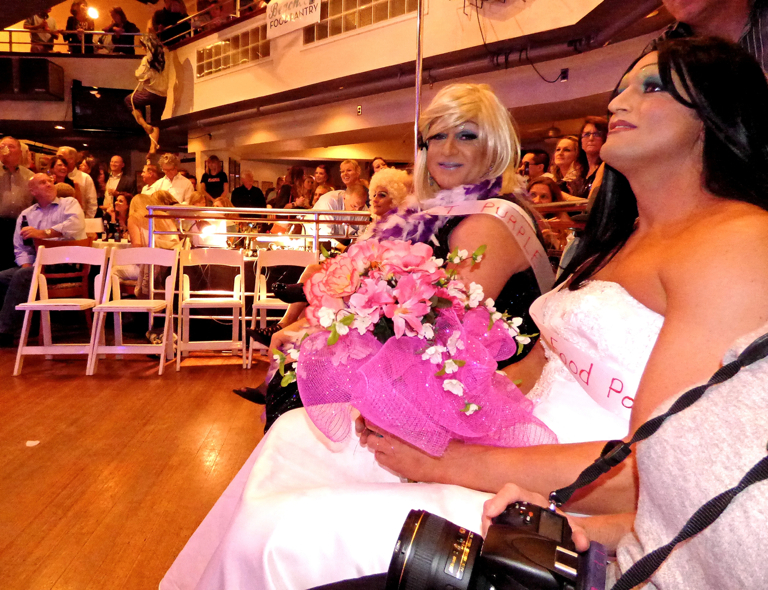 If there is such a thing as a springtime social on the Outer Banks, it has to be the Womanless Beauty Pageant, sponsored byBrindley Beach Vacations. Walking through the doors of the event is like a one/two punch of friends and neighbors everywhere.

Performed before a packed house at Kelly’s Outer Banks Tavern on Saturday evening, the 2014 version exceeded all expectations by any measure.

The concept is simple. Ten men dress as women, and whoever raises the most money for the charity of their choice is crowned Miss Womanless Beauty Queen for 2014.

The benefit to Outer Banks charities is immeasurable. With almost all of the $90,000 going back to local nonprofits, the effect on the local community is immense.

And just as remarkable as the generosity of the people who attend the pageant, the men who get up in front of an audience of 500-600 enthusiastic supporters and walk the beauty runway is equally important. These men don’t just strut their stuff, they also have to answer a series questions. Watching a man trying to answer, “What is the biggest challenge to young ladies today?” is roughly the equivalent to watching a penguin try to fly.

Then there is the talent part of the show. Who would have thought that Richard “Lotta Love” Bruce from Pigman’s Barbecue–the 2014 Queen–could pole dance . . . and do it really well?

Ultimately the Pageant is one of the things that define the Outer Banks community. Dee Buchanan, who has organized all four Womanless Beauty Pageants, becomes emotional talking about the success of the event. “I just couldn’t stop crying,” she said. “These are busy men who find time to do this. And I’ve got a list of volunteers for next year who said they want to do it.”

Every year the contributions to charity keep getting larger and larger. Last year the Pageant raised $35,000 and even at the start of this year’s event that figured had been surpassed with $39,000 in ticket sales and pledges.

A $15,000 pledge before the show began to the Beach Food Pantry pushed that total over $50,000 and that was followed by Doug Brindley of Brindley Beach Vacations indicating he would match any $1000 pledge that was made. Six pledges followed quickly to the Outer Banks Hospital Get Pinked, the Beach Food Pantry, Dare Education Foundation, Project Purple, Outer Banks S.P.C.A. and the Outer  Banks YMCA.

Those donations, coupled with money flowing into the individual collection buckets, made the evening one to remember.

Although all of the local charities will benefit from the event, the big winner has to be the Beach Food Pantry. The $19,000 in collections was tops for the night, but there was also a matching grant they had pending allowing them to almost double their donation.

Putting the pageant together is a lot of work, yet in some ways the results seem to go beyond the money raised. “I’m excited that we were able to give so much back to the community,” Doug Brindley said. “It’s very heartwarming.”