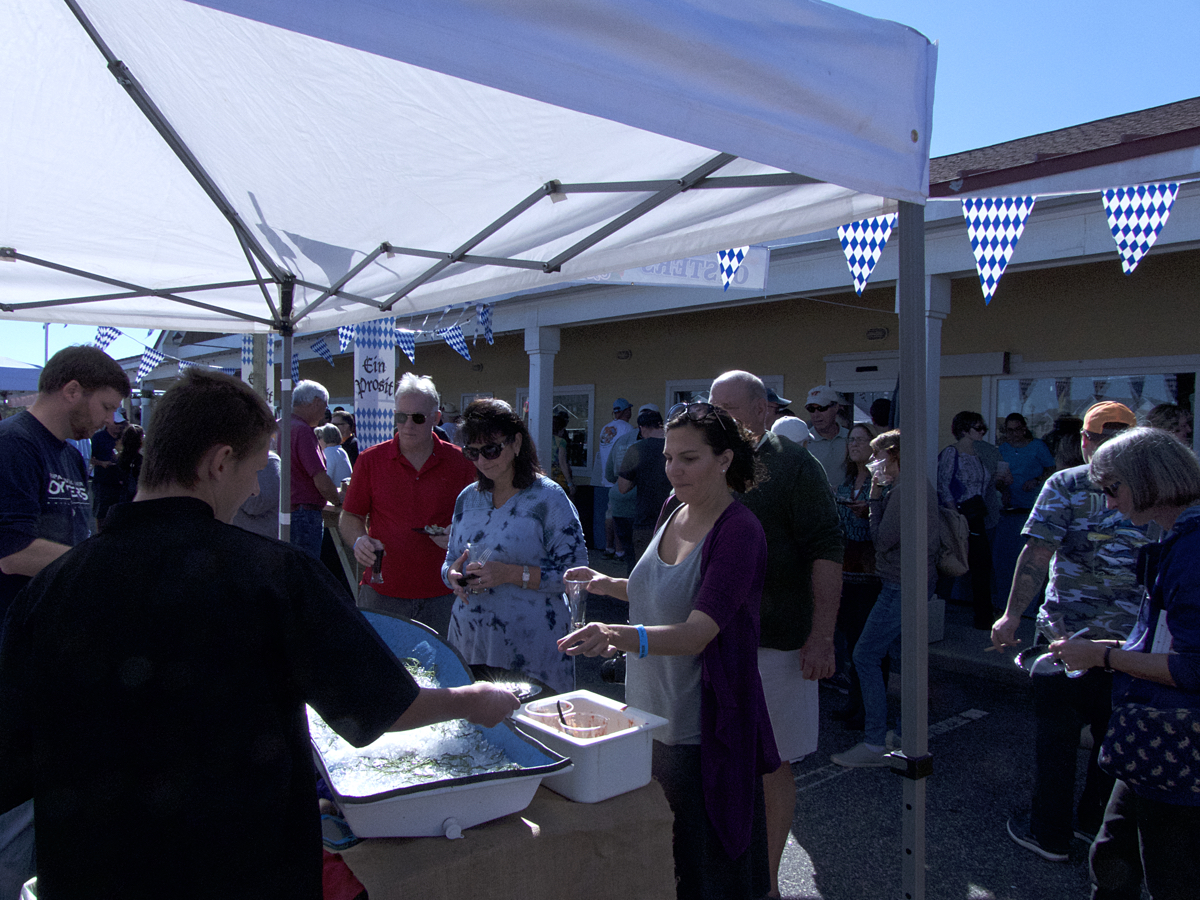 Combining lots and lots of fresh local oysters, beer from eight microbreweries, oyster dishes from eight local chefs, the only way the First Annual Outer Banks Oystoberfest could get any better is if the weather cooperated.

And October 29, 2016 was as close to a perfect Outer Bank fall day as there could possibly be.

Sponsored by the Outer Banks Restaurant Association as part of their annual fall Restaurant Week, Oystoberfest was everything hoped for and maybe a little more. Held at Southern Shores Crossing in Southern Shores, if crowd size and enthusiasm is any sign as an indicator, this was a roaring success.

The prepared oyster dishes from the restaurants was excellent, but the star of the show had to be the seven oyster farms that were on hand. It’s rare to find an oyster this recently in the water, and what is remarkable is the range of flavors in an oyster this fresh and the extraordinary differences that exist depending on where the oyster was raised.

Ruby Salts oysters are raised toward the southern end of Cape Charles. The Chesapeake Bay is still saline in that area and the oysters almost explodes with a saltiness that calls out for a good beer…and luckily there was plenty on hand.

By comparison, Chadwick Creek is located south of the Pamlico River on the mainland side of the Sound and the waters there are slightly brackish, almost fresh. The oysters from their farm are wonderfully mild with a rich but subtle flavor.

At the balance point, Cape Hatteras Oysters—much closer to home, are raised around Buxton and they are a milder, less briny oyster than Chadwick Creek, but are certainly saltier than the Ruby Salts.

Oysters from all five farms were sampled, and all of them were excellent. Most were sampled raw—not the writer’s favorite, but we do what we have to do sometimes, but a few of the farms did offer a choice of raw or steamed.

Beer was certainly the perfect match for the oysters, but there were so many being poured—eight breweries and each had were sampling two beers—that there is no way to give a good run down of what was on hand.

The North Carolina Coastal Federation was on hand to collect oyster shells. The Coastal Federation has been instrumental in reestablishing oyster reefs throughout the state. Their work in conjunction with state and federal agencies has been instrumental in bringing a once thriving oyster industry back to life. Mismanagement and destructive harvesting practices decimated oyster populations in the late 1980s and 1990s.

Dan Lewis, owner of Coastal Provisions and the President of the Outer Banks Restaurant Association, said proceeds from the day will be donated to the Coastal Federation.