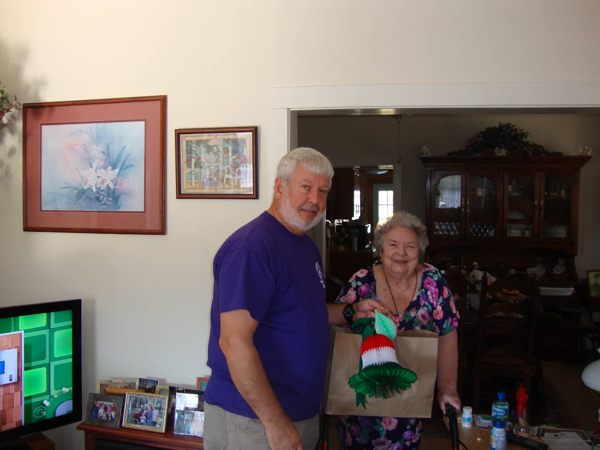 Tucked away among all the activities of the Christmas season, among the joy of family, finding gifts and giving gifts, there is something special about this time of year—something that has greater meaning than a new bike or a silver earring.

“To give up one’s very self — to think only of others — how to bring the greatest happiness to others — that is the true meaning of Christmas,” Harriet Beecher Stowe wrote in an 1889 article for the American Magazine. It is a sentiment that holds as true today as it did 126 years ago.

It is that same sentiment that seems to be at the heart of the Twelve Days of Christmas gifts that has been a part of Dare County Meals on Wheels for the past two years.

“What we are doing is giving the homebound recipients in our Meals on Wheels project a gift bag, and in those bags are just small things that to you and me might not mean anything, but to them it means a great deal,” Shirley said.

The event planners had worked together on a number of projects over the years and as Shirley tells it, the two of them were were thinking about what they could do to make the season a little brighter for everyone.

“At some point, three years ago, we had talked about how fun it would be to do some Christmas project together, maybe decorating someone’s house who couldn’t afford to do that. And then she (Renee) was like, ‘You know Donnamae works with me and she delivers for meals on wheels.’”

Donnamae Morrisette who works part time with Renee Landry, is also a volunteer with Meal on Wheels. To Shirley creating 12 days of gift giving for homebound recipients of Meals on Wheels seemed like a natural outgrowth of something that she and Renee had been doing for some time.

“When we have flowers left over from events, I would take them on my route,” she said. “Giving them the flowers, that brought immense joy . . . Just that minute in time can be life changing for them.”

She notes that although the holidays are a time of happiness and family for many, for the people being served by Meals on Wheels, unable to drive, or even get out of their house because of health concerns, this time of year may have a different meaning. “The holidays can be depressing,” she said.

“To wake up every day and have something to open or look forward to, “ she goes on to say. “One person was sort of melancholy. When we gave her the gift bag, she was so excited. When we saw her again, she was wearing make up and smiling.”

The gifts are not large, but their size is unimportant. It is the sense of being a part of the world around them that is the where the real impact lies Sandy Scarborough, Director of the Dare County Center explains. “It is enormous. The recipients are overwhelmed with the generosity community.”

Although the individual gifts may not be that large, putting everything together truly “takes a village.”

As an example of how many Outer Banks businesses contributed to creating the Twelve Days of Christmas, the packaging was designed by Heather Rollins of HLR Designs and printed by Access Designs. A number of restaurants have arranged to have a lunch delivered—no small feat when serving 25-30 people. There are fresh fruits and flowers being delivered, Outer Banks Rum Cakes has donated to the project, and that is just part of the list.

The gifts all have to be wrapped, although Shirley admits that may not be as arduous as it sounds. “Renee and I that’s our forte,” Shirley said. “We’re really geeking out together. Picking out the ribbons and packaging.”

“It is a huge involvement. It’s really awesome. We are really proud of our local businesses and taking care of our own,” Shirley adds.

The 12 Days of Christmas is a labor of love, a project that takes time and considerable effort, yet in the end there is an intrinsic reward, a sense that giving back has been worth while. “It makes you feel really good,” Shirley said “Then you find out how the gifts were received, what their reactions were and that’s where emotionally it tugs on you. It’s like ok that’s really awesome.”